I know there has been a huge gap in my reporting… Games coming too quickly and I have been so busy, I’ve neglected my other blog as well. I’ll be better for Miami. How about those Bulls though? Heart. Toughness. No excuses. Team concept. I mean, there are not enough superlatives to describe what we’ve witnessed in this now legendary series… 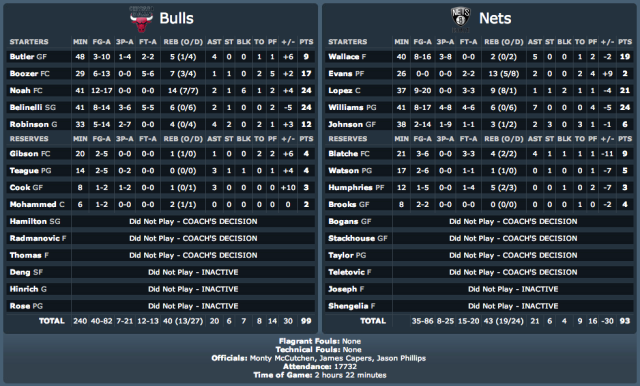 Last time I posted, the Bulls were in firm control of the series following the amazing shooting performance by Nate Robinson. After that the Bulls lost up in Brooklyn (110-91). They then experienced some freakish ailments (Taj and Nate with the flu, Deng with a viral issue that required a spinal tap) and injuries (Kirk missed 2nd game in a row due to a severe calf strain). With all of this, they STILL narrowly lost Game 6 (95-92).

This sets up Game 7 in Brooklyn. Kirk still can’t go after trying to warmup before the game. Deng has complications with the spinal tap and is still not medically cleared to play yet. What would we do? How would we perform? Joakim had boldly predicted a game 7 win for the Bulls in his childhood home of Brooklyn. As a fan, that both scared and excited me… You knew the Bulls would need a higher intensity to start the game, leadership in Noah, and contributions from everyone. Guess what? We got all three. 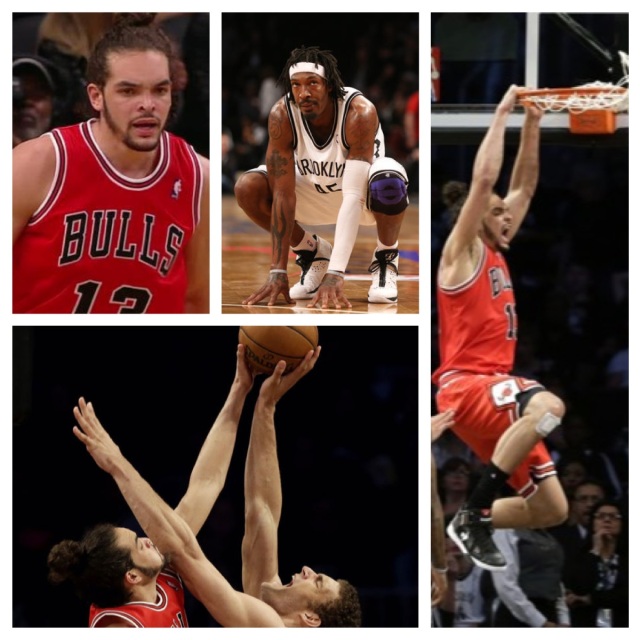 Energy, Effort and Intensity (√)
The Bulls opened the game with the right mindset. They were clearly the aggressors. Chuck from Inside the NBA said that Brooklyn plays too cool. Like they don’t want to break a sweat. Interesting observation because they are kind of low key that way. They scramble, but its mostly Reggie Evans and Gerald Wallace. Who else sacrifices and makes plays with the same passion and intensity as those guys for the Nets? Noah would get FIVE offensive rebounds and 10 points in the 1st quarter! Nets were immediately on their heels a bit even though they were only down 4 pts after one.

Noah’s Leadership (√)
41 min. | 24 pts. | 14 rebs | 7 off rebs | 6 blks | 1 steal | 2 assists
Not only did Noah back up his guarantee that the Bulls would win, he played in a way that would leave no doubt about who he is now as an NBA player. He would say later that he wanted to make the city of Chicago proud. You did Jo, you did. Joakim came to play and his f00t looked like plantar who? The rest of the starters fed off his demeanor and were clearly energized by his play.

Contributions From Everyone (√)
Thibodeau showed some coaching chops by going to players who’d mostly been sitting the whole series. Teague and Cook played 14 and 8 minutes respectively and they both stepped up. The bench players helped to extend the lead to 17 by halftime. Very impressive game from the rookie in particular. He shied away from his first couple of shots, but then he just seemed to relax a little bit and ended up going 2-5 with 3 assists and a steal. Daequan hit a huge three and Bellinelli has shown that he’s a starter in this league. With heavy minutes (he logged 41), he has been very effective. Quick to the ball, staying ready to shoot, diving on the floor after loose balls, etc. He matched Noah’s team high of 24 pts. The “next man up” and “we’ve got more than enough to win with” mantra that the coach has been preaching all year is finally starting to take root in me. I believe him. Its officially no longer “pie in the sky” thinking.

Incredible effort from the Bulls. How can you not be happy for this team? Epitomize what’s good about the NBA.

Wow!!! @chicagobulls with an all out assault on the @brooklynnets! Short on bodies but not heart! Salute! Nets have questions #MayDay time

Impressive win by the bulls. Noah is a beast.

This Bulls team is something special.

Noah is an animal!! Heart and brains!!

Noah: “So many guys stepped up today. That’s what it’s all about, just being able to share these moments in the locker room…” #NETSvBULLS

So fu****g proud of my team, it’s been a rough 4 days for me but this makes everything better. See you guys in miami. #SeeRed#Holdat

Key Quotes:
“I’m just so proud of this team. We’ve been fighting through so much all year and to be in this situation, play on the biggest stage in the world and to be able to win and now play against the Heat, all these experiences, I (don’t) take those for granted,” – Joakim Noah (C Bulls)

“I thought our guys, we took a big punch in Game 1 and we kept fighting back and that’s been the story of the season,”
– Bulls coach Tom Thibodeau

“It’s disappointing. We won Game 6, we felt like this was our series, but they came out and played a great game. Noah, like I said, he’s a warrior. He battled through his injuries and just had a monster game. We really had no answers for him down low tonight.” – D. Will (PG BKN)

“They played like they weren’t ready for their season to end. They ran what they wanted, and we were on the back of our heels.” – Gerald Wallace (Forward BKN)

We are already in South Beach! Quickly preparing to face the champs, who came off of what looked like 4 scrimmage games against the Milwaukee Bucks. The MVP coronation, I mean presentation/announcement was held today for LBJ. No hate, he deserved it.

Gotta say I’m hoping for some rust. Bulls have come this far, why not try to steal game one? Chicago has come out of a war and is in rhythm. Just because the Heat has more talent does not automatically equal a game one loss. I am going to try, and I mean try to put up a preview with matchups, but I can’t make any guarantees. Enjoy the fan goodies above and I hope to be in-game tweeting from @ChiTwnBullsBlog! Follow us for the latest.