27 and NOT counting – Deng, Boozer lead Bulls past Heat with physical play, toughness 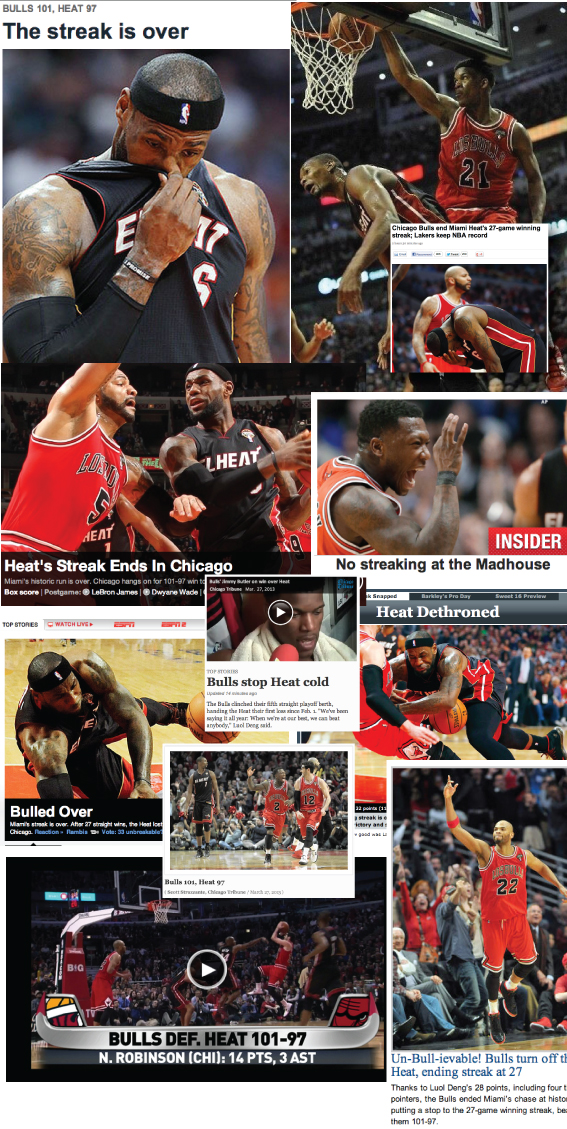 Well Bulls fans, after being an afterthought by sports media for most of the season (with the exception of #TheReturn), how sweet is it to not only beat the Miami Heat in a nationally televised game, but also end a historical 27 game winning streak? As the Heat were chasing the ’71-’72 Laker’s 33 game record, the media frenzy surrounding the climb was nearing a crescendo. To be the team to stop this streak, and be part of the NEVER ENDING news cycle is just amazing. I’m hoping that it won’t be, as some Miami Heat fans have joked, the “highlight” of our season.

Chicago just didn’t back down. They sustained Miami’s runs to take the lead (briefly), and they were disciplined on defense. They played a physical game (which LeBron complained about in his post game quotes), and they made this team work. Didn’t take care of the basketball as much as they should have (20 turnovers), but they managed to mitigate the damage done by chasing down players in transition and just fouling guys at the rim. Old school. Make your points from the line, period. Definitely a playoff atmosphere. Sooo proud of the Chicago Bulls. Makes you wonder what could be possible with everyone healthy and playing at their natural positions.

Asked Thibodeau this morning if he had mentioned streak to Bulls. “What streak?” he said.

Heat’s 27 game winning streak will end under an avalanche of Bulls toughness and noise in the United Center: Chicago, 98-89 w/ 30 secs left

Way to go Bulls, sorry I wasn’t at the UC for this one. Incredible effort and way to believe in each other.

No Rose, no Noah, no Rip. But the Bulls have the system and toughness Tom Thibodeau brought them. Great win.

27 wins in a row is an unbelievable achievement. No surprise Chicago — so tough, so committed to defense — were the ones to end it.

Boozer offensive rebound and putback between 3 Heat was the final nail. Heat’s only weakness: Last in NBA in rebounding.

What’s Next?
Potential trap game against Dallas. Looks like it may be over for Dallas as they are in 10th place in the West after Utah, but someone needs to tell Dirk and company because they are playing desperate, tough basketball right now. Battling for that 8th spot that the Lakers have a soft grasp on.

This is a unique opportunity to put our OWN streak together. The Bulls have not won more than 3 games in a row ALL SEASON. I can’t think of a better time to change that. Bulls have the momentum of this big win at their back, they should keep going.

1PM CST is the tip. CSN broadcast. It’s Easter weekend! I might not be around that time of day but we’ll see.