Bulls at Grizzlies: MLK Day Game on ESPN at Noon 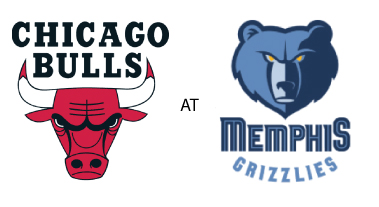 Its the Martin Luther King, Jr. Holiday and the Bulls find themselves playing the Grizz again. Last year, at this time, the Bulls were in Memphis, the game was on ESPN, they were without both Noah and Booz and Derrick calmly got his only career triple-double… Crazy that he only has one, but like he says in that commercial, “…I don’t care about no triple-double, long as we win.” Win they have, and if we can sneak another one today, it would mark the Bulls 6th in a row. Korver was also unconscious from the three-point line hitting 6-10… Ended up with 22 pts.

Fast forward to 2012… Z-Bo is still out, but  Mike Conley is back. He missed the Bulls home opener with an ankle sprain. With Conley back, Memphis’ attack will be more organized. Rudy Gay is providing facials on every other Grizz highlight I watch, but they still miss Z-Bo’s presence in the paint. Gasol has still been a force. He had 10 pts, 12 rebounds, 5 assists and 4 blocks against the Knicks last week… Just turning back Chandler and whomever else THOUGHT they were going to do something down low. Tony Allen had 5 steals and was 5-8 in 26 minutes. Memphis led the league in steals last season and there is probably no other team in the NBA, with the exception of the Miami Heat that plays the passing lanes better than the Grizz. Our turnover prone bigs as well as D.Rose MUST take care of the basketball.

Finally, the Grizz will be super motivated to play the Bulls tough because we absolutely TROUNCED them in the home opener on New Year’s Day, winning by 40 pts. That was a fluke. The Grizz just didn’t have their legs up under them and they were facing a dominant Bulls team FINALLY getting to play in front of their fans after opening up on the road. I don’t expect any sort of lopsided victory today, just hoping to beat em’ by our usual 9 or 10 pts. 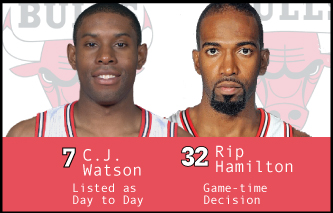 Who knows whats going on with CJ and Rip… I heard CJ Monday or Tuesday and Rip Friday. We’ll see…

See you on the other side Bulls fans and LET’S GO!!!

2 Responses to Bulls at Grizzlies: MLK Day Game on ESPN at Noon