Posted on January 8, 2012 by chitownbulls 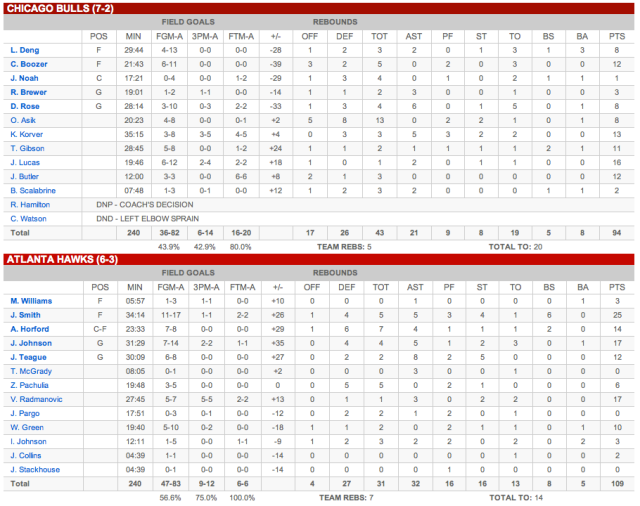 First off, let me start by saying that this game meant more to the Atlanta Hawks than the Chicago Bulls. The Atlanta Hawks needed this win. I’m sure they stewed over the unbelievable comeback win that occurred at the United Center just days earlier, and although the Bulls were the third team they would face on the end of the Hawk’s first back-to-back-to-back sequence, they were ready. They handled the Bulls from the outset… They applied playoff level defense against D.Rose and thanks to an offensive onslaught from the three pt. line, they ran away with the game.

I said in the game preview that Atlanta wasn’t going to just lay down and let us beat them. What I did NOT count on was the Bulls starters laying down, dying and conceding the game before it was over… Mercifully they were benched with three minutes left in the third and would not return.

Bulls getting pounded by a Playoff team we dominated last season is a tough pill for fans to swallow… Bottom line is, the 62-win season is over, this team is re-establishing itself and a 7-2 start with seven games played on the road ain’t bad.

Let’s go Bulls Fans… No reason to be sad. We are 7-2 and still have an outside chance of making it to the top spot of a power ranking list on Monday… We had a hell of a week minus Saturday’s beating.