Bulls Hang on to Win Nail Biter Against Hawks

Posted on January 3, 2012 by chitownbulls 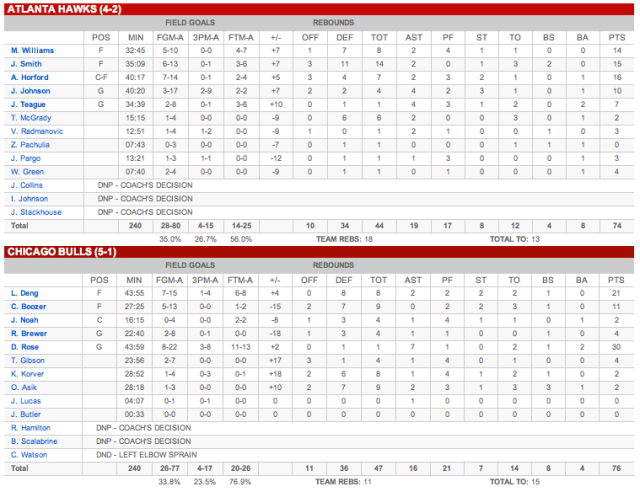 The Bulls had all of their fans’ hearts in their collective throats tonight.

After an unwatchable first half that saw the Bulls trailing by as much as 19 pts, they were able to mount an impressive comeback to steal this game from the Atlanta Hawks.

In my game preview, I said that the Hawks would be brimming with confidence after beating the Heat and I was right. They came into the United Center with a calm demeanor and shot 54% to run out to a 13-4 lead.

This was a night when nothing could go right for Chicago. It was brick city and the Bulls could only muster up 28% shooting to begin the 3rd quarter. We only scored 26 pts. in the first half guys, c’mon! Omer Asik hustle plays (should have co-mvp honors), tenacious defense and some easy baskets here and there managed to keep us in the contest…

The 4th quarter would see us pull even with Atlanta at 62, based largely on impossible plays by Derrick Rose and Luol Deng.

Even though ESPN is already pressing Kevin Durant’s suit for his MVP coronation, the REIGNING league MVP is still winning basketball games in an even more dominant fashion than last season.

Rose made a 3 pointer, got fouled on a drive and made 2 free throws, then made back to back threes… (Really?) THEN, he gets back to the free throw line, makes both free throws and hits on two more driving layups. That is insane. He wasn’t even having a great game. Maybe he doesn’t get MVP again this season, but for the NBA community as a whole to simply DROP him from the discussion and we’ve barely started playing games is kind of silly. We are talking about a special, once in a generation talent in D.Rose.

Deng then makes a running layup with 7 seconds left to ice the game. In what all us fans thought was a trick play of some sort, just ended up being a broken play, Thibs would admit later. Great FIND by Noah…